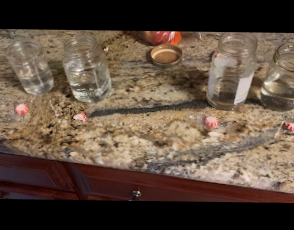 My previous blog post taught us how important our yucky slobber is in a fun, yummy experiment. Today will be another Digestion Experiment!

For our “candy experiment” we used peppermints because that’s all we had on hand. I’m all about trying to use what we have!

I save all my glass jars to try to reduce waste, and this is just another example of why saving things comes in handy!

We took 4 jars and 3 mints, one of which was broken in half. I poured water into 2 glass jars and vinegar into the other 2. I placed the mints in front of the appropriate jars so the kids and I could plop the mints into the jars at the same exact time.

“1…2…3!!!” The kids and I plopped the mints in, I turned on the stopwatch feature on my phone, and then went about making our lunch. At about 13 minutes, we checked on them. We noticed that everything was about the same. The red stripes were coming off the mints, but in the jars of BOTH of the half-mints, not only was the water pink from the red stripes, there was a white milky liquid floating around in the jars too-where the mints were already starting to slowly dissolve!

We went and scarfed our lunch down and then came back to check on the mints again. The mints had now been soaking in the water and vinegar jars for 35 minutes.

You can see the water is pink in both, but the half-mint jar is a lighter pink, and you can see a tail of white liquid to the right of the half-mint. It’s so cool to see how much quicker the smaller mint is breaking down!

Okay, not my best pictures ever, but you get the idea. The half-mint in the Vinegar jar is even smaller than the water jar!!

This experiment is about CHEWING. When we CHEW, the food gets smaller and broken down even quicker than whole pieces. But I took it a step further with my kids. Last week in Biology we also learned about stomach ACID. Stomach acid kills germs, but it also helps break down the chewed up food even more before it passes to the small intestines. Similarly to how the Vinegar break down the mints a little faster than the water, our stomach acid helps to break down our food faster than water could.

What kind of science experiments have YOU done to learn more about how amazing our bodies are?

Hi! I'm Elizabeth. I am an At-Home, Christian Mom, who has battled anxiety and depression for many years. Through others being planted in my life due to God and His amazing planning, I have come such a long way from where I was just a few years ago. My hope is that this blog blesses others and helps them fight their way through the enemy's evil distractions that only steal, kill and destroy our joy!! Jesus tells us: "The thief comes only to steal and kill and destroy; I have come that they may have life, and have it to the full." John 10:10. Anxiety and depression keep us from living our life to the fullest, doesn't it? That's not what Jesus wants for us! Do you struggle with anxiety and depression? I did, and still do to an extent, but man is it getting better! Mama, don't struggle alone, because you are NOT alone! Don't forget to sign up with your email address so encouragement lands right in your inbox and you don't have to go looking for it! 💗 View all posts by thesparrowmama

The advice given on this page is a Christian-direct approach, and are methods I have found to personally help in my own journey of battling anxiety and depression.  ALWAYS consult your physician before implementing any changes in lifestyle or medications.